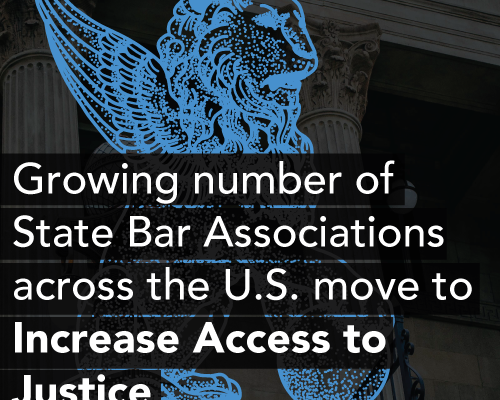 In a growing movement among state bar associations throughout the US, the Oregon State Bar’s board of governors has approved progressive recommendations to change rules around paraprofessional licensing and to authorize individuals without law degrees to sit for the bar exam.

On Sept. 27, the board approved recommendations from two bar task forces with the goal of increasing access to justice in Oregon. The first notable recommendation is for a paraprofessional licensing program which would authorize licensed professionals to provide limited legal advice without attorney supervision, according to the board of governor’s agenda. Variations of a paraprofessional program currently exist in Utah and Washington, with California considering a similar proposal.

“The most compelling argument for licensing paraprofessionals is that the bar’s other efforts to close the access-to-justice gap have continued to fall short. We must broaden the options available for persons seeking to obtain legal services, while continuing to strive for full funding of legal aid and championing pro bono representation by lawyers.”

The second notable recommendation approved by the board would authorize applicants to take the bar exam without having first completed a juris doctorate degree at an ABA accredited law school, as long as the applicant meets specific requirements.

The proposal suggests allowing individuals to sit for the bar and be licensed in the state as long as the applicant has at least a bachelor’s degree, good moral character, and has completed a four-year mentorship/tutelage program in a law office, legal department or court.

The Oregon State Bar’s Alternative Pathways Taskforce Committee persuades that lower costs of entry to a license could lead to a more diverse practicing bar in Oregon. The committee states that participation in the four-year program would be significantly lower than the costs of law school, estimating the costs of the program to be between $12,000 and $18,000, significantly lower than then $35,000 per year residents would pay at the University of Oregon School of Law.

“The next step will be to create detailed proposals and regulations relating to each of the two above recommendations. All proposals must be approved by the Oregon Supreme Court before going into effect.”

AlphaLawgics offers tools to save time and money throughout legal proceedings for both individuals and legal professionals, increasing affordability and accessibility to the legal justice system. Our Freelance Marketplace is a free tool to connect individuals and professionals, allowing those seeking legal services to find on-demand legal services providers who match their budget and specifications, throughout the US.